Back in June my friend Mads and I decided to ride to Brighton, the route would be semi-off road (read: bridleways) and would involve one night camping, a perfect opportunity for me to test my newly acquired bike packing gear. Come Saturday morning we set off a bit late (Mads had been out the night before, I am lazy), and headed to the Hampton Ferry (Founded in 1514, it’s one of the oldest companies in the UK). The ferry man said we were lucky to arrive when we did as it had been raining torrentially shortly before, we’d been blissfully unaware in a bubble of sunshine, clearly a good omen. Following the Thames South West for most of the route, we eventually turned due South to camp just below Guildford. We pitched camp, setting up under my tarp, and deciding to go the pub for beer, we were also treated to a free lecture from the landlord on the evils of the EU.

Day two brought a bright morning, and a slug who had decided to have an adventure of his own, into my sleeping bag. Enlivened by beans and hot beverages we packed up and hit the road. Most of the the route followed a disused rail line, until we turned off for lunch in the shadow of the South Downs Way. It came as a welcome break as the path I’d picked to turn off involved a fair portion of riding through waist high nettles and brambles mixed in with long grass which threatened to jam our derailleurs. Once revived we scaled the chalk wall and rode a short section of the South Downs Way before descending into Brighton for some much needed fish and chips.

A week after Skulls finished the Straggler for me I took it for it’s first little test ride to the South Downs.

Day one was riding the London>Brighton off road route to the pub in Petworth for dinner and beers, then a quick blast out of town to some local woods to camp. Day 2 took us on a mix of roads and singletrack along to the New Forest for another sleep under the stars (rain). Great riding, lots of drinking and some “camp vibes”. The bike swallowed it all up no problem and with some tweaks over winter it’ll be ready for a longer trip on the Tour Divide route next summer.

We built this surly for Bleddyn a couple of months before opening the shop. Its already well used and looking nice and ratty.

We used his old wheels, Hope pro 2 to Hplus Archetype
His old cranks off his fixed gear, Raceface Decadence with a wide narrow 44T chainring.
His old seatpost and brooks saddle.
We sourced a old 25.4 thomson stem off ebay and used a xlt touring bar for a comfy bar position with odi lock on grips.
Tyres are our favourite tan wall 35c Panaracer Pasela and sks mudgaurds.
Avid V-brakes with Kool Stop Salmon pads.
Xpedo pedals.

Favourite part is the drive setup.
11-36 cassette with a Shimano Zee clutch mech and XT shifter. It gives you enough range for commuting and is lighter and looks cleaner than running a front mech or chainguide.

Another cool Surly Straggler build this week. This ones a bit more off road capable and a LOT bigger.

The coolest part of this build is the bars. Nitto B903 Bullmoose imported from Fairweather Japan.
Gives a really nice vintage MTB look to the bike that works nice on a steel frame with a lugged fork like this.
Width:710mm
Extension:90mm
Back sweep:15°
Grip area size:22.2mm
1 1/8″ Ahead Stem

Andy will be doing some cool rides on this soon so you can follow him on instagram here.

And yes he is that tall. 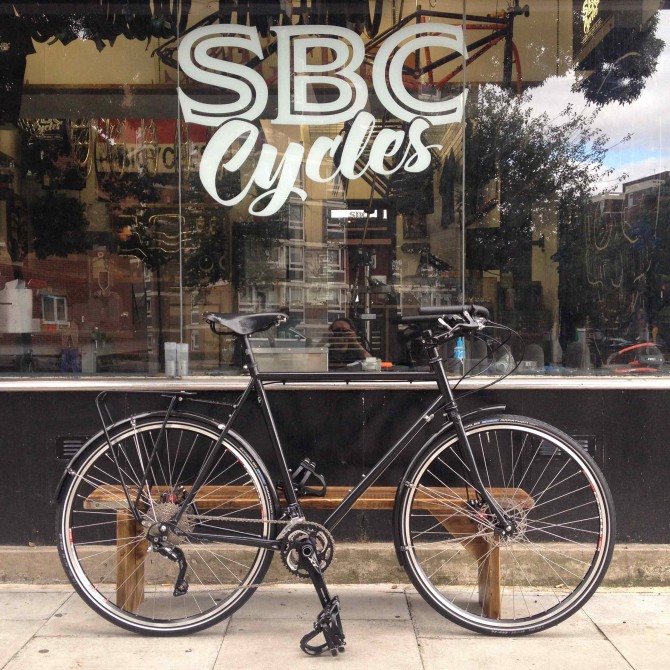 1st day of official trading saw us building this rad Surly Straggler for Mick. Custom painted frame and handbuilt wheels…
A definite upgrade from his trusty, rusty Raleigh Royale…
Thanks for being our first customer!